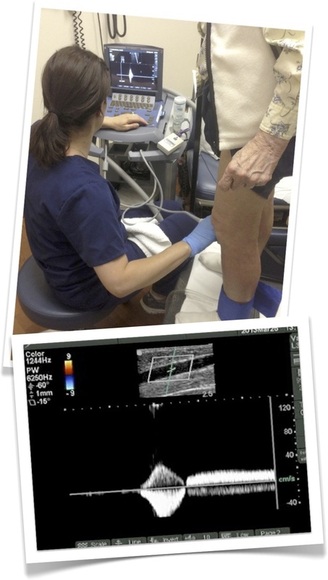 Duplex ultrasound combines Doppler flow information and conventional imaging information, sometimes called B-mode, to allow Dr. Hopkins to see the structure of your blood vessels. Duplex ultrasound shows how blood is flowing through your vessels and measures the speed of the flow of blood. It can also be useful to estimate the diameter of a blood vessel as well as the amount of obstruction, if any, in the blood vessel.
﻿
Conventional ultrasound uses painless sound waves higher than the human ear can detect that bounce off of blood vessels. A computer converts the sound waves into two-dimensional, black and white moving pictures called B-mode images.

Doppler ultrasound measures how sound waves reflect off of moving objects. A wand bounces short bursts of sound waves off of red blood cells and sends the information to a computer. Doppler ultrasound produces two-dimensional color images that show if blood flow is affected by problems in the blood vessels.

When performing duplex ultrasound, your physician uses the two forms of ultrasound together. The conventional ultrasound shows the structure of your blood vessels and the Doppler ultrasound shows the movement of your red blood cells through the vessels. Duplex ultrasound produces images that can be color coded to show physicians where your blood flow is severely blocked as well as the speed and direction of blood flow.  When the direction of flow in the veins is found to travel towards the feet (rather than back towards the heart and lungs, which is normal venous flow), this is called venous reflux disease, which is abnormal.  This condition is caused by damaged one-way vein valves, which when working normally, close to prevent gravity from pulling blood downward, toward the feet, after the calf muscles pump the blood in the leg veins up toward the heart and lungs.